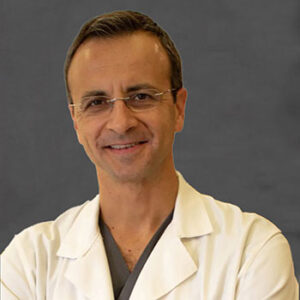 The craniofacial syndromes Apert and Crouzon

The Apert and Crouzon syndromes are congenital syndromes characterized by craniosynostosis (premature fusion of cranial sutures) and variable developmental deformity features of the craniofacial complex. The objective of this lecture is to address the aetiology of these syndromes, to present how the dentoalveolar and skeletal structures of the craniofacial complex are affected, to discuss current treatment procedures, and to provide insight of social life aspects of these persons. Both conditions share a number of common craniofacial features, including mid-facial hypoplasia, concave facial profile, hypertelorism, ocular proptosis, short nose with deviated nasal septum, narrow and arced palate, and dental malocclusion such as negative overjet, anterior open-bite, posterior cross-bite and severe dental crowding. Dental agenesis of permanent teeth is also a frequent common characteristic. Cleft palate and lateral palatal swellings are encountered more often in children with Apert syndrome. The aforementioned dysmorphic features may be significantly improved in almost all instances after the final combined orthodontic and orthognathic surgical treatment. Cranial vault decompression and/or reshaping, mid-facial and orbital advancement procedures, often in conjunction with a mandibular set-back are the most frequent craniofacial surgical operations. Persons with the above clinical conditions cope difficulty with their lives, having to face important obstacles when developing their self-image during the transition from childhood to adulthood.

Dimitrios Stavropoulos is an Officer of Hellenic Navy and Head of the Department of Orthodontics of Athens Naval Hospital. He has been promoted to Commander in 2017. He graduated from the Dental School of Aristotle University of Thessaloniki and the Hellenic Military Academy of Combat Support Officers in 1997. In 1998, he completed a comprehensive one-year rotational training program in the clinics and laboratories of Athens Naval Hospital. Between 2001-2004 he specialized in Orthodontics, in the Orthodontic Department of Dental School of Göteborg University, Sweden. In 2007, he graduated from the Hellenic Naval Command and Staff College. In 2011, he received his PhD degree in Dentistry (Orthodontics) from the Sahlgrenska Academy of Göteborg University, Sweden. His doctoral thesis concerned the Apert and Crouzon craniofacial syndromes. In 2018, he attained a Master’s degree upon fulfillment of the requirements of a 3-year postgraduate program in Healthcare Management of the School of Social Sciences of Hellenic Open University. In 2021, he graduated from the Hellenic National Defense College. He runs a private practice in Athens from 2005.

His clinical interests focus on orthodontic treatment of children with craniofacial syndromes, presurgical orthodontics, clinical application of temporary anchorage devices as skeletal anchorage systems, as well as the clinical use of computer-aided designed and computer-aided manufactured orthodontic appliances. His research interests focus on craniofacial syndromes, children with cleft lip and palate, muscular function of the craniofacial complex, as well as on indexes concerning the need and evaluation of orthodontic treatment. He has published many studies in peer-reviewed scientific journals and he is reviewer of many scientific journals in the field of orthodontics. He has been repeatedly honored for his military activity (decorations, medals, commendations) and scientific activity, with awards including honorary award and scholarship from the Hellenic State Scholarships Foundation for excellence in undergraduate studies in the Dental School of Aristotle University of Thessaloniki, awards of excellence from the Hellenic Military Academy of Combat Support Officers, award for the best oral presentation from the Greek Association for Orthodontic Study and Research.  He has been a member of the Orthodontic Committee of Central Board of Health of Hellenic Ministry of Health and Welfare, and he is an elected member of the General Assembly of Hellenic Dental Association and an appointed member of the Scientific Affairs Institute of Hellenic Dental Association.