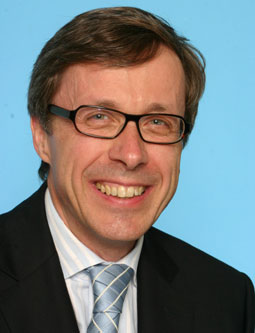 Rotations of the occlusal plane not only affect the vertical dimension of the growing face but also the anteroposterior relation between upper and lower jaw. Conventional tooth born class III orthopedics often result in upper molar extrusion. Furthermore, an anterior or counter clockwise rotation of the palatal plane, by the line of force passing below the center of resistance of the zygomatico-maxillary complex, may also result in a downward movement of the upper molars. The increased occlusal forces in the lower molar region, combined with the forces applied by a face mask to the chin, will result in a posterior rotation of the mandible and increase of the vertical dimension of the face. This reduces the prominence of the chin and may be wrongly interpreted as a growth restriction of the mandible. However, when bone anchored class III orthopedics are used, a slight closure of the mandibular plane angle may be expected. Successful midface protraction commonly results in a class II molar occlusion. The upper miniplates can be (re)used for upper molar distalization. In contrast to cervical headgear, upper molars are not extruded, and some bite deepening instead of bite opening is observed in the incisor region. Appropriate timing of the bite opening mechanics is needed for efficient bone anchored upper arch distalization.

Hugo De Clerck is a graduate of the Ghent University orthodontic program, he received his PhD in 1986 and he maintains a private practice in Brussels. He received the European Research Essay Award in 1988. His research team received the Dewel Award for the highest- rated clinical research paper published in the AJO-DO in 2011. He has been Professor and Chairperson of the Department of Orthodontics at the Université Catholique de Louvain from 1989 to 2006. Currently he’s Adjunct Professor at the University of North Carolina at Chapel Hill. He’s a former President of the Belgian Orthodontic Society and Fellow of the Royal College of Surgeons of England. His main research interests are in skeletal anchorage, biomechanics and orthopedics. He lectured extensively on these topics throughout the world.